Remember that amazing photo that turned into a “hilarious” meme? The weasel riding the woodpecker? Here, look:

It came from amateur photographer, on a lovely walk with his wife, who wanted to show her a Green Woodpecker. He got his wish, he snapped this picture when he heard its distressed call, and that turned into stuff like this: 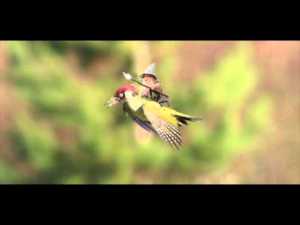 Comical, right? Well, not really. Sure, it’s an incredible wildlife shot, the kind of stuff you’d never normally see, unless Sir David Attenborough was narrating in the background on your television. I understand that something so magnificent does things to the Internet. It inspires creativity and whatnot. But it’s not cute or laughable to me. When I look at it, honestly, it reminds me of this:

I’m not comparing weasels and woodpeckers to a monk self-immolating in protest, I’m saying my emotions were jarred looking at both photos for the first time. I saw faith and sadness and selflessness looking at the above picture. When I looked at that woodpecker’s horrified eyes, I felt its terror. There was a predator on its back, trying to snap its neck and it was fleeing in a desperate attempt to save itself.

Animal photos and videos are a major staple of the internet. They can be adorable, funny, mean, goofy, and everything in between. However, things can be misinterpreted. I don’t think it’s funny or viral when there’s an animal in distress featured in a video or photograph. Here’s another example:

A Cute Cat With A Funny Meow? No, that cat is clearly upset about something and I don’t think it’s amusing.

Not everyone can realize when a critter is scared or reacting negatively to something. It’s not a perfect world, but I wish humans would educate themselves about our fellow citizens of Earth. They are going through some tough things too.

2 thoughts on “I Feel Bad For The Woodpecker”